On October 29th, 2018, at 1:50 PM, a 30-year old woman blew herself up near a group of policemen at a demonstration on Bourgiba Street in Tunis, close to the Ministry of Interior. The bomber, Mouna Guebla, was the only person killed in the blast, though she was able to injure approximately a dozen policemen and one civilian. The central location, the bomber’s gender and the initially high number of lightly injured individuals all served to generate and maximize significant media attention. The demonstration was ironically against police brutality, protesting the death by gunshot of Ayman Othmani, who was killed in Sidi Hassine under unclear circumstances involving a smuggling operation. Authorities had released the customs police officers involved in the killing, stating that the death was accidental and due to a ricocheted bullet fired in the air. 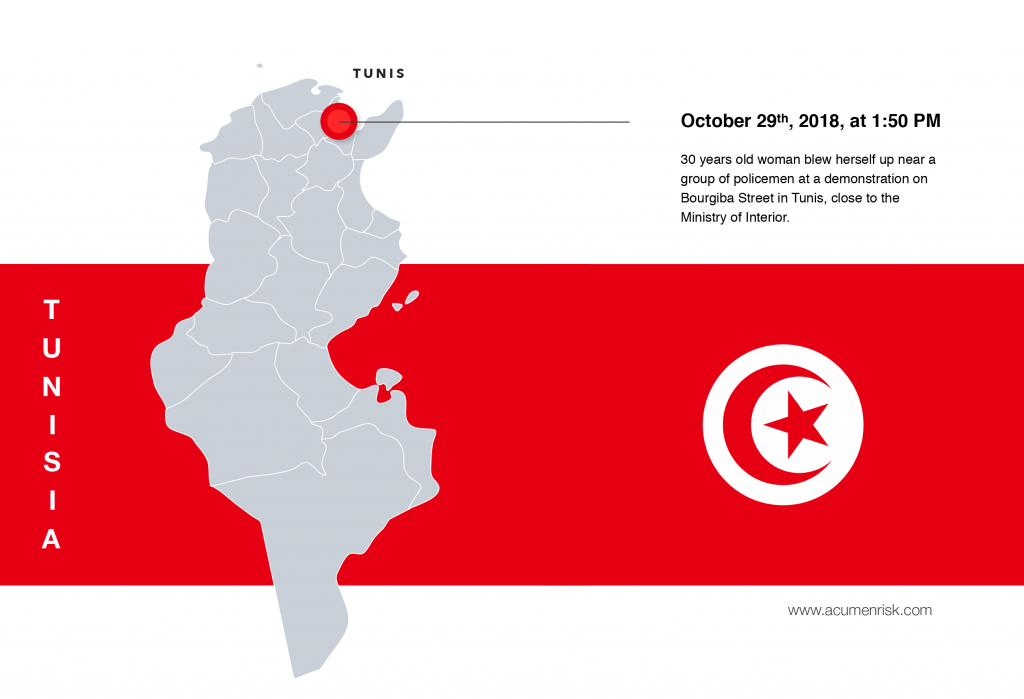 Based on initial forensic evidence gathered from the scene, the improvised explosive device (IED) was not a suicide vest but rather an IED with a small quantity of explosives and small-sized shrapnel, atypical of a suicide bomber. The device was held inside the bomber’s handbag. The device appears to have been detonated when held against the victim’s left hip. Photos of the targeted police van at the scene of the attack show the effect and dispersal of the shrapnel on the vehicle’s right side, and some remains on the floor. This matches the description of various limb injuries of the policemen. Some unverified claims suggested it was remotely detonated, but evidence is yet to support such claims.

Prime Minister Youssef Chahed reflected the quick return to normalcy with a visit to the site on his way to an Interior Ministry meeting nearby on the issue of improving security on October 31. He had visited the wounded at the military hospital where they were being treated a day prior. President Essebsi deflected attention from the bombing before leaving for a G20 conference in Berlin by placing the blame on economic conditions and political bickering. He expressed surprise at the return of terror to the cities, but noted that such attacks occur everywhere, as they had for example at a Synagogue in the United States. “It is an atrocity. We thought we had eradicated terrorism but, in fact, let us pray to God it does not eradicate us…The political climate in Tunisia is bad, in all honesty. Perhaps this situation of ours distracts us from what is more important,” he said.

The bomber was an unemployed woman from Zorda in Sidi Alouane District, Mahdia Governorate (140 miles south of Tunis). According to her family, she had graduated four years ago as an English teacher, but was unable to gain employment, leading her to herd sheep for a living. Approximately six months ago she became reclusive and befriended a man online claiming to be from Tunis and currently living in Turkey. She became increasingly radicalized chatting with this alleged member of IS. He had sent her the explosives through a friend in Tunis. Ms. Guebla had only written some cryptic messages online and was not known to law enforcement. She had no police record and no organization has claimed the attack so far. Neighbors and relatives have noted that Mouna recently traveled and stayed in Ettadhamen for a week. The marginalized neighborhood northwest of the center of Tunis has been known for jihadi activism and as a source for foreign fighters in Syria and Libya.

Several congratulators and suspected facilitators have been arrested since the incident, as the Tunisian authorities have reacted with an iron fist to shows of support for the bomber. The attack itself had been reportedly planned only since the 27th of October.

In a speech before parliament on 19 November, the Interior Minister, Hicham Fourati, stated that the terrorist had been in contact with individuals in the mountains, indicating she swore allegiance to IS. Nevertheless, the organization has yet to claim the attack. In a surprising turn of events, forensic evidence showed that the bomber did not receive the bomb, but rather prepared it at her home by herself, supposedly after receiving bomb-making instructions. After leaving her home in Mahdia, she stayed at a place in Bab Soueiga from which she left to carry out the attack. 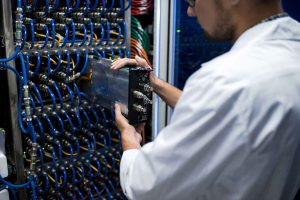 Iran Reinforces the Aerial Defence Around its Nuclear Facilities 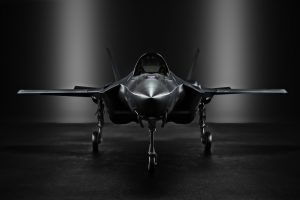